Efforts to save Crawley adventure playgrounds from closure have failed

There was an outcry from parents when the borough council announced plans to close both Creasys Drive and Millpond Adventure Playgrounds, while converting the ones in Cherry Lane and Waterlea into unsupervised play areas.

But their plea for councillors to look again at the options and review the decision fell on deaf ears when discussed at a meeting of the cabinet on Wednesday (February 3).

Mr Mullins pointed out that the closures would save the council around £210,000, while keeping all four open would mean more than £500,000 would have to be spent on refurbishments.

He said this was ‘a very considerable amount of money that we actually don’t have’.

The council received an online petition signed more than 2,100 times, though fewer than 1,000 of those signatures were deemed valid.

Because of that, it could not be debated by the full council

A spokesman said that, after checking the postcodes of the signatories, many were found to have come from abroad, including 250 from India and Australia and around 200 from Malaysia.

To be valid, the person who signed the petition has to live, work or study in Crawley. 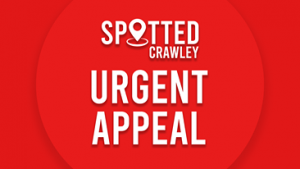 We have delivered over 10,000 food parcels to elderly and vulnerable residents of Crawley. Please click the picture to support us.

During the meeting, a statement was read out from petition organiser Vicki Cordell.

Stressing the importance of the playgrounds to children’s physical, social and mental development, she said: “Throughout the last 12 months, the younger people within our community have suffered severely.

“They have been forced into lock-downs and quarantine, taken away from their peers, family members, schools and general social circles.

“Many children have shown to be struggling with their mental wellbeing and here you are saying that when they are finally able to get out and mix again, they will have nowhere to go.

“Youths of today are the future of this town. It is how we treat them and look after them now that will have a huge impact on the future employment and economy of Crawley.

“Just because they can’t speak up does not give anyone the right to ignore their human rights to play and good mental health.”

The cabinet voted unanimously to continue with the closure of the playgrounds.

Leader Peter Lamb said the playgrounds were the most expensive service offered by the council when comparing the user numbers to the cost.

He added: “The whole driver behind this change is financial.

“It is the reality that we’re facing unprecedented financial pressure this year due to Covid and that that pressure will continue for a number of years with no ability to make up the gap.

“So either this has to go or something else does.”