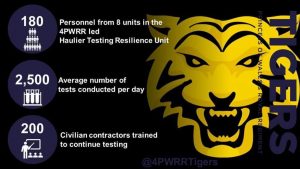 D Company (D Coy) is an Infantry Reserve Sub-Unit, part of The 4th Battalion Princess of Wales`s Royal Regiment (4 PWRR) also known as ‘The Tigers’ based in Crawley and across the south of the UK. Normally members of D Coy train as Infantry soldiers, as well as other roles including medics and chefs. However, in addition to supporting Op RESCRIPT in 2020, members of D Coy have once again stepped up to support the COVID-19 effort. A MACA task (Military Assistance to the Civilian Authorities) is a task given to Tri-Service personnel to assist various UK Government departments who request military assistance. 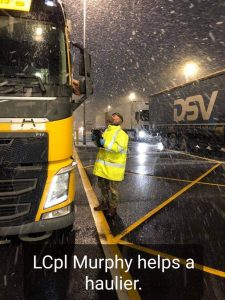 Several Reservists from D Coy have been deployed on Op ROSE, the task to assist the civilian authorities with haulier testing in Kent. Lance Corporal Murphy who runs an outdoor military fitness company was fulfilling the role of a Team Leader. He said, “Being self-employed I rarely get the opportunity to help out. Being in lockdown I get to serve and, at the same time, run my business remotely. I am very pleased to be able to have this opportunity”. The soldiers on Op ROSE predominantly coordinate and help hauliers administer the Lateral Flow COVID-19 Test (LFT) prior to them departing the UK. All soldiers deployed on Op ROSE stepped up to the task so that they could do their bit. 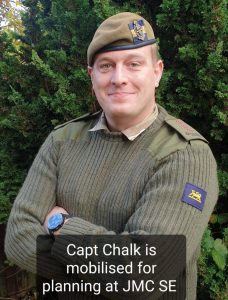 Captain Chalk, who lives in Horsham, is another member of D Coy. He has mobilised into JMC SE (Joint Military Command South East) for a period of six months as part of the planning cell. This role involves processing and delivering orders for a Headquarters which will give direction for a variety of MACA tasks in the south east. Included in these tasks are support to the vaccination task force, support to the NHS and community testing, amongst others. “Normally my role is to head up the training of new candidates and recruits for 4 PWRR, this is a very alien job for me and, although lacking in experience of staff work, I jumped at the chance to play my part as I realise that times are quite hard for many people at the moment, and if I can make a difference then I should”.