Exclusive – John Yems has a message for Crawley Town

Former Crawley Town Manager, John Yems, has given us a message for the fans and players ahead of the new season.

Yems left the club by mutual consent towards the tail end of last season after allegations of racist abuse and segregation were made to The Daily Mail.

The allegations, which Yems denies, prompted the FA to look into the matter, at the time of printing this article the results of that are still not known, and no charges have been issued against John.

“I first of all want to thank the Crawley Town fans, and players, for their support during my time at the club, I’ve always had a close relationship with the fans, travelling on the train with them to some away games and many a chat after the game in the Redz Bar”

Yems, who guided Crawley throughout lockdown, not forgetting that cup run and the scalp of knocking Premier League Leeds out the FA Cup last year went on to say. 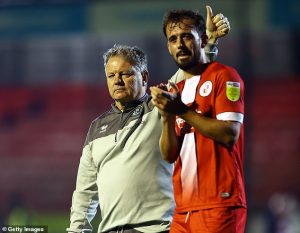 We’ll hopefully be bringing you more news from the club as the season progresses.