Recently I had the pleasure of catching up with Patrick Roberts, the man behind the dream of “Uncle Pats”, the latest culinary delight available in Crawley; 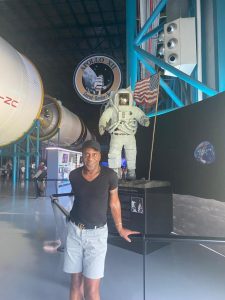 Speaking about his youth Patrick said;

“After I left school I had a few jobs until I moved to Crawley. I didn’t play football for about a year, but football was always in my DNA and I started to play again for a team called Turner’s Hill. I spent one season there basically getting fit again, but when I got fit I moved on and play for Handcross, I was there for 4 seasons. In my second season I was voted, ‘Players Player’, and managers player of the season and top goal scorer. After that I had spells with Three Bridges, Oakwood and then East Grinstead. I ended up playing for Pease Pottage, thoughout of my career I’ve played with some exceptional players, three players spring to mind, Ray Harris, Clinton Moore and Leroy Rule, I’ll have these three in my team anyday!”

Patrick in his playing days

“When I was about 48 and playing for Pease Pottage Vets. During the game I just kept on losing my balance and falling over, I knew there was something wrong. I tried to ignore it but a year later I noticed a steady decline in my balance, coordination and general movement. 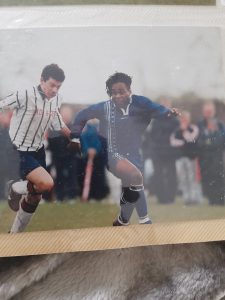 “I eventually went to see the doctor and told him that I felt drunk every day even though I hadn’t been drinking, he said that doesn’t sound right so he sent me for a brain scan. Two weeks later I went back for the results. The professor of Neurology told me that I have a hereditary condition called ‘Late on-set Cerebellar Ataxia. He explained that the Cerebellum which is the back part of the brain that is responsible for speech movement and balance and there is not a cure, at that moment my whole world changed, I can’t work anymore, and I’m now registered disabled”

“One day, I was around my shall I say ‘brother from another mother’s house’ and I mention to him that in Crawley we have many eateries of all nationalities but there was not a real representation of true Caribbean food and I thought we could provide that… the rest is history and the venture has given me an added lease of life, Uncle Pats was born”

“From a dream came a reality and so Uncle Pats idea and vision, compelled by a desire to reach out to the heart of the local community and feed people well, came the opportunity to collaborate with the owners of the Grand Bay, Broadfield.” 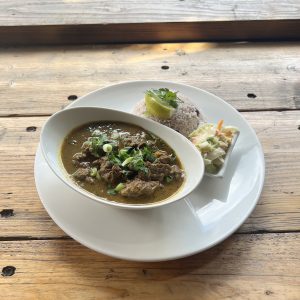 Curry Goat. Just one of the many authentic Caribbean dishes you can grab at Uncle Pats

“We are proud to share with you the most authentic West Indian food in Sussex cooked by our chefs who have over 40 years experience creating wonderful and delicious cuisine from the Caribbean. All of our produce is locally sourced from Halal Buchers, and our Meats are seasoned for 48hrs. Our fresh produce is freshly made which will bring a little sunshine to your palette and the taste of Uncle Pat’s will make your taste buds dance!” 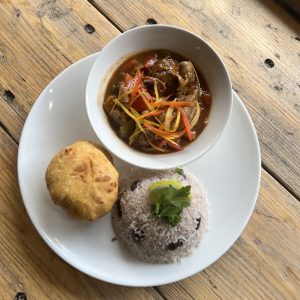 The whole team at Uncle Pats would like to thank everyone for their continued support and participation, in particular the owner and his team at the Grand Bay.

Should you know anyone affected by Ataxia or wish to learn more or offer support please visit: