A notorious offender has been given a Criminal Behaviour Order aimed to curb her offending in Crawley.

Sussex Police applied for the order against Katie Hicks, which was granted by Crawley Magistrates’ Court on Thursday 11 October. 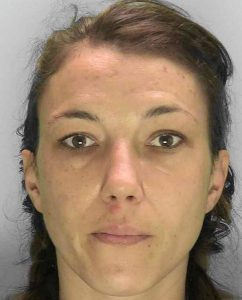 Hicks, 33, of no fixed address – who has 26 previous convictions for 68 offences – has been found guilty of committing many acquisitive crimes including shoplifting and theft from unattended motor vehicles. This order will be welcome news for both the victims of Hicks’ crimes, the residents of Crawley and the business community.

The two-year Criminal Behaviour Order prohibits her from the following:

Sitting / laying / loitering along any residential roads in the area of Crawley, between 6pm and 6am each day.

Sitting / laying / loitering in any car park complex within the borough of Crawley.

Entering any commercial / retail premises in Crawley or Gatwick, when you have been banned from that premises by the owner / occupier or other person acting on behalf of the owner / occupier, of such premises. This includes all members of the Crawley and Gatwick Business Watch scheme.

Remaining on any commercial / retail premises or medical establishments within Crawley, if you are asked to leave by any owner / occupier or other person acting on behalf of the owner / occupier of such premises.

PCSO Kieran Chappell, of the Crawley and Mid Sussex Neighbourhood Policing Team, said: “We are pleased to have obtained this Criminal Behaviour Order for Katie Hicks. The behaviour of Hicks has been causing significant loss and harm to both the residents and businesses of Crawley for a considerable period of time.

“This order will further assist Sussex Police in tackling her offending, preventing further loss and safeguarding our community.”