A local band are just 24 hours away from playing at this years Isle Of Wight Festival. 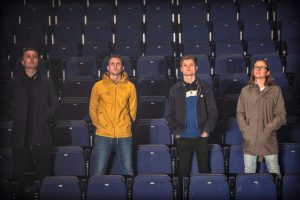 The band started out a few years back, playing pubs around Crawley. Mainly Ifield Cricket Club, Snooty Fox, The Swan and then bigger gigs at the Redz Bar, where they managed to build a fantastic following.

Their last Snooty Fox gig, the venue reached capacity and people were queueing down the road which the band said was “Mental for them”!

The band have been releasing their own music for a few years now that have been well backed by BBC Introducing, plus picking up some support slots for Glen Matlock (Sex Pistols) and The Vapors (of ‘Turning Japanese’ fame) along the way.

Their 2 most recents singles ‘Rodeo’ and ‘Let’s Make Plans’ have had a great reception and off the back of these singles and sell out shows, they’ve been booked to play this year’s Isle of Wight Festival;

We’re also playing a music/magic show with The Magic Mod at the Prince Albert in Brighton on 13th August too which is selling very well and definitely worth checking out..”

All of the bands tracks and upcoming gig can be found here lnk.bio/slowtimemondays