Police investigating a rape in Crawley would like to identify the two men pictured as part of their ongoing enquiries.

Officers were in the town centre on Saturday morning (March 5) when they were made aware of a woman in distress in the grounds of St John’s Church.

The woman reported that she had been raped and had her personal belongings stolen by people not known to her. It happened between 3am and 4.15am.

The victim was supported by officers in attendance, and continues to receive specialist help as the investigation progresses. 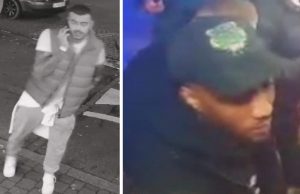 Police believe the two men pictured could help with their enquiries, and they are keen to identify and speak with them.

Anyone who recognises them, or the men themselves, are asked to get in touch with police. Officers would also like to speak to anyone who saw any suspicious activity in the area around that time, or who may have any other relevant information, CCTV or dash cam footage.

Members of the public can contact police online or by calling 101 quoting Operation Cottonworth. Information can also be passed to police anonymously via the independent charity Crimestoppers on 0800 555 111.