A Crawley Borough Council housing development has been named after Royal Marine Scott Summers from Crawley, who died in action in Afghanistan in 2007 aged just 23. 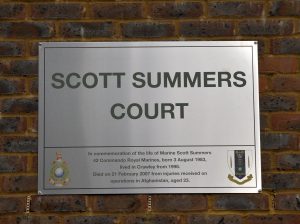 The affordable rent housing development, which consists of six maisonettes and three flats, has been named Scott Summers Court. Located on Woolborough Road and Cobbles Crescent on the site of a former doctor’s surgery, it is near to another development named after a Crawley soldier who died while serving in Afghanistan, Private John Brackpool. 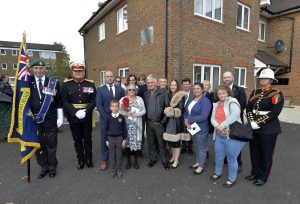 A service of dedication where a memorial plaque was unveiled on the building took place on Thursday 14 October attended by representatives from Scott’s family, the Royal Marines and Crawley Borough Council. This was followed by a short informal gathering for attendees which took place at the Army Reserve Centre. 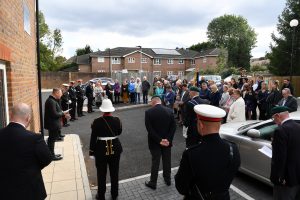 Scott’s mother Carol said: “It is such a privilege to have this block of flats named after my son Scott and the family would like to thank Crawley Council for honouring him in this way. I often drive past them and it reminds me of all the happy memories that we have.  And even though it has been some years since we lost Scott, we still miss him so much. We are also grateful that 42 Commando of the Royal Marines wanted to officiate the service making us feel that we are still part of the Marine family.”

Lieutenant General R A Magowan CB CBE, Commandant General Royal Marines, said: “The Royal Marines are proud and deeply honoured that Crawley Borough Council has recognised Marine Scott Summers, an outstanding young man and a superb Commando, who died in service to the Nation. Once a Marine, always a Marine.”

“There have been more Mayors of Crawley than residents who have roads and buildings named after them. This is a fitting tribute to Scott’s courage and sacrifice”