Crawley Town manager still suspended, but no signs of an investigation

On Saturday 23rd of April, the Crawley Town manager John Yems was suspended by the club pending an investigation into allegations of discriminatory language and behaviour.

The announcement was made by the clubs new owners on social media. 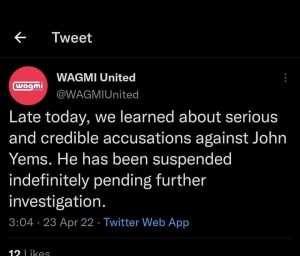 Today, Spotted have been contacted by a credible source close to the club who has made us aware that there was no discussions with staff at the club before John was suspended by the new American Owners.

The source goes on to say that there is currently no signs of an investigation into the allegations, which have still not been specified by the FA or PFA – the club are still not aware of WHAT allegations have been made against John, so how can the owners claim these are credible accusations?

Players and backroom staff have been advised not to contact John, who has been a massive part of this club, imagine being cut off from your work colleagues and friends, without any real explanation as to why? Johns a strong character as we all know, but i do worry for his Mental Health  currently, he’s been told he cannot perform the job he loves doing, and been cut off from his football family too! It would seem to me, that John has been used as some kind of scapegoat and has been hung out to dry by the new owners, who are probably wanting to avoid any negative press following their purchase of the club.

Another source went on to say:

“Look at Johns career, the players he’s worked with, if he was this kind of person this would have come to light years ago, he is a fiery character, we all know that, but these allegations are potentially career ending with no substance as to what was said or to who?”

Questions that need to be asked:

Is there an official investigation into the allegations? If there is, who is conducting this?

What are the allegations made, what is alleged to have been said by John?

Have the FA even checked the validity of these allegations?

I welcome any response from WAGMI or Crawley Town regarding this article.